Driven by a rapidly declining birth-rate and an ageing population, Japan has the highest old age dependency ratio in the world at a value of almost 45% (source data, World Bank). In simple terms it means that on average there are just over two people of working age (16-64) to support one person of pensionable age (65 and above).

The graph below shows a polynomial forecast predicting Japan’s old age dependency ratio hitting 100% by 2040 i.e. one person of working age to support one person of pensionable age in just over two decades. 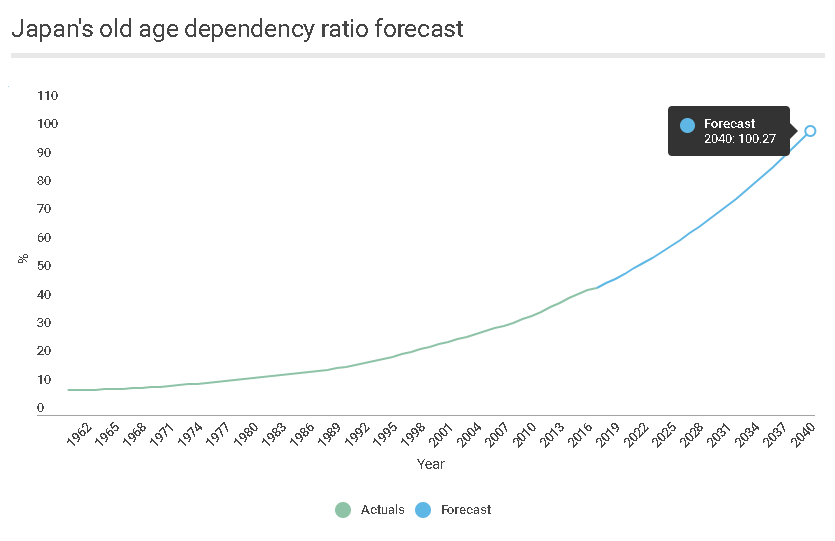 Even considering wartime scenarios an old age dependency ratio of 100% will likely set a historical precedence and will undoubtedly place huge pressures upon Japan, indeed raising questions around the very viability of its economy.

Attracting immigrants and boosting the productive population is one way to reduce the dependency ratio, however, Japan has historically stuck firmly to its course of maintaining an ethnically pure society; in fact amongst the leading industrial nations Japan has the notable status of being the most ethnically homogenous.

The United States and the European Union have similarly struggled with labour shortages (post-World War II) and an ever increasing dependency ratio. Both regions have responded with immigration as a remedial measure albeit with significant populist trepidation.

Japan at last seems to be having a tentative national dialogue on immigration, but is it too little and too late for its already ailing economy?

View all posts by Ibrahim Rashid